I Am Nasrine - Charity Event at The Lexi Cinema, London

Newcastle University is hosting a special film screening and Q&A with Tina Gharavi at the Lexi Cinema, London, recently voted ‘coolest cinema ever’!

Venue: The Lexi, at Kensal Rise, NW10, is the UK’s first social enterprise cinema, where all profits go to charity. It was co-founded by Newcastle graduate Teresa Graham. Check it out at www.thelexicinema.co.uk

The Cause: All proceeds from this event go to the Newcastle University Women’s Circle, which raises funds to provide bursaries to allow disadvantaged young people to study at Newcastle.

To Book: The Lexi Cinema only has 60 seats so spaces are strictly limited. To book please fill in this form now!

REORIENT is a Middle Eastern Arts and Culture Magazine, and in this beautiful half-synopis/half-poetic prose piece writer Joobin Bekhrad explores the emotionally-draining path that both Nasrine and the audience must walk.

REORIENT - I Am Nasrine

"The British Public has been hijacked"

Interview with The Guardian, 8th February 2013

Natalie Shooter of The Guardian provides an excellent piece that discusses a whole host of issues. It includes, but is not limited to, I Am Nasrine's BAFTA nomination, the inspirations behind the film and its tumultuous production, the Iranian cinema climate and the peddling of anti-asylum sentiment in the British media.

The Guardian - "The British Public has been hijacked"

Tina Gharavi discusses the struggles she faced in acquiring funding for I Am Nasrine and subsequent distribution difficulties, as well as talking about the larger work of Bridge + Tunnel and it's existence on an ever-changing landscape for UK Arts. Ena Miller conducts an excellent interview that has Tina providing insights into the work of Bridge + Tunnel and the importance of making media experience available to all.

I Am Nasrine - BAFTA Nominated!

Tina Gharavi has been nominated in the 'Outstanding Debut by a British Writer, Director or Producer' category at this year's BAFTAs for I Am Nasrine. The nomination came as a complete surprise to all involved, not least Tina herself, who only heard the news through a friend on Facebook.

"I woke up and someone had put 'congratulations' on my Facebook page - quite unbelievable. I'm still smiling. It is a small film and to be acknowledged in this way, I feel like I've already won."

Shiraz Haq, who plays Ali, could hardly believe the news himself:

“At first I thought it was an elaborate hoax. I couldn't believe it. I was over the moon – emotional. It was one of those moments of extreme validation."

In this interview, Tina discusses the inspiration behind I Am Nasrine, the film's turbulent production process and the progress it has made since it was completed. A fascinating read with insightful questions and answers from both parties.

I Am Nasrine scoops the 'Best Screenplay' award.

Congratulations are in order for all those involved with I Am Nasrine as the film wins the Best Screenplay award at the 2012 Brooklyn Film Festival.

Tina Gharavi joined Jenni Murray and BBC Radio 4's Woman's Hour to discuss I Am Nasrine, asylum seekers and immigration in the UK.

You can listen again to Tina and Jenni's thought-provoking discussion here.

I Am Nasrine at Parliament 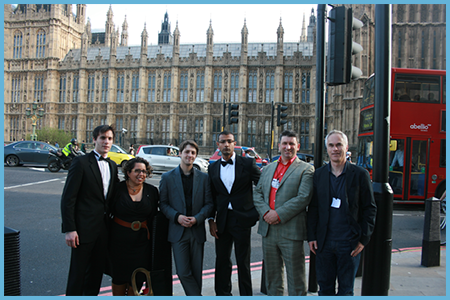 Building on its fast-growing reputation for depicting the daily struggle of young asylum seekers in the UK, Tina Gharavi's tale of immigration and identity appeared at The Houses of Parliament for a special screening and Q&A session on 22 May 2012. The screening was sponsored by Ali Rushanara, MP for Bethnal Green & Bow, and was attended by parliamentarians and special invitees, including cast and crew members.